Today, we’re cooking in the kitchen with Jen from Bakerette …

Do you ever have those days when your child springs a school project on you at the last moment that’s due “tomorrow”? We had one of those days just this week. My daughter had to have an ethnic cooking project done along with pictures and a poster outlining the steps along the way. Why did kids put off things like that? Was I like that as a kid? I don’t remember.

To my delight, the Tortilla Espanola recipe wasn’t a super hard or lengthy dish to make and we had all of the ingredients! A bonus!

The Tortilla Espanola (Spanish Omelet) is an authentic dish eaten all over Spain. The Spanish serve it either as a light dinner or as an appetizer. There are different variations of this dish. You can add You can add roasted red peppers or ham to it, too, or keep it as is.

Start by heating up oil in a small skillet (about 9-10″). Once heated, add potato and onion mixture. Cook until fork tender.

Remove from heat, drain, and add to beaten egg.

Return to lightly oiled frying pan and cook for approximately 3-4 minutes, or until the sides and bottom of the omelet are lightly brown (the center will still be moist).

Return skillet to the stove and lightly oil bottom and sides of pan. Slide omelet back into skillet and cook for an additional 3-4 minutes or until cooked through.

Turn out onto a plate, cut into slices, and serve! Delish. 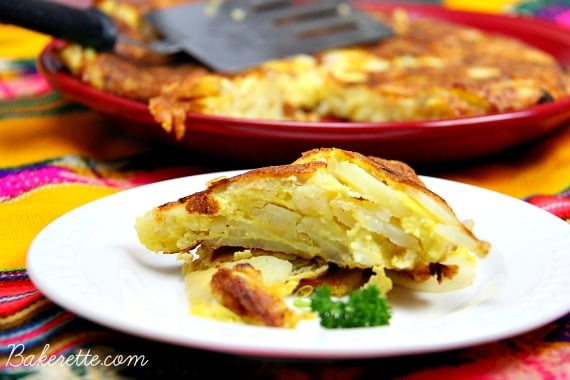 Thanks for checking out my Tortilla Espanola post. Check out my full collection of Breakfast articles, and get more Breakfast recipes by Ashton Swank, Ashley Johnston, Mariah Leeson, Tammy Mitchell and Tauni Everett.

Ruthie is a professionally trained Chef who specialized in bringing cuisines, cultures, and culinary adventures to your kitchen. Madeliene is the mastermind behind the blog along with being a wife, mother, and full-time masters/doctorate student in psychology. Our mother & daughter team inspires readers to create in the kitchen, explore the world, and find joy in all the many aspects of living!
Author Bio Box by HOI
Author:
Ruthie & Madeliene
Categories:
Mentions:
eggs, olive oil, onion, potatoes
Keywords:
Tortilla Espanola
Last Updated:
April 17, 2019