French Gâteau de Crêpes à la Florentine Recipe (or in English- Spinach, Mushroom, and Cheese Torte) layers of mushrooms, spinach, with a gruyere cheese sauce that is absolutely decadent.  It will surely impress even the pickiest guest!

I’m having so much fun with our Culinary Journey-ing!  France is an amazing country and cuisine.  Remember lasts weeks French Pâte à Crêpes ?  I hope you’ve had a chance to make some.  This week we’ll be using some of those crêpes to make a French Gâteau de Crêpes à la Florentine!  Oh yah. 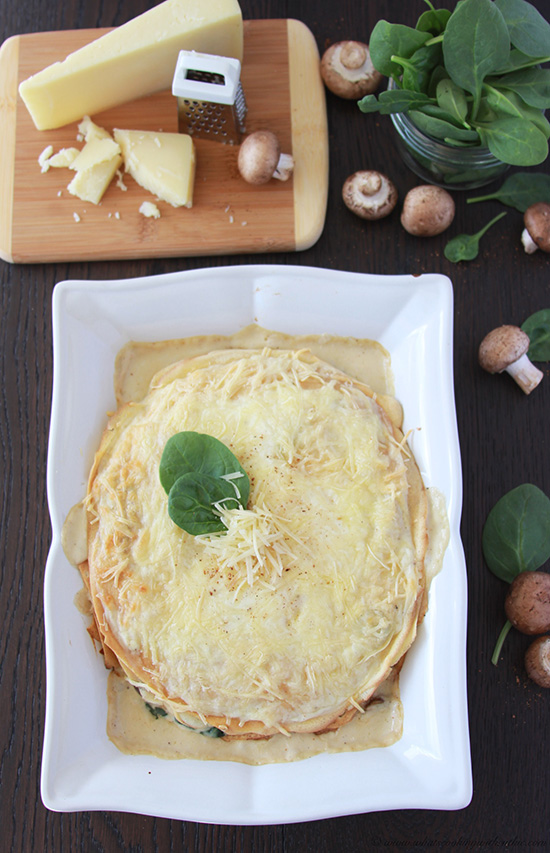 This recipe can be for an appetizer by cutting it into 8 pieces or enjoyed for brunch or lunch by cutting into 4 pieces.  It’s actually easier than you may be thinking right now.   Whip up some crepes in the morning and save 8-10 of them for this recipe, then 45 minutes before you’re ready to serve, whip a simple Béchamel Sauce with Gruyere Cheese, layer in sautéed mushrooms and fresh spinach, and sprinkle with parmesan cheese.  Oooooo la-la!!  Bon Appétit.

What are the 5 French Mother Sauces?

French chef Marie Antoine-Carême was the first to organize all the French sauces into groups that were based on four foundational sauces. Later, French chef Auguste Escoffier added one more sauce so that there were now five “mother sauces,” which he codified in recipe form in Le Guide Culinaire in 1903.

These sauces were seen as the foundations for many dishes and other sauces, and they were supposed to be known by heart by culinary students. While they are still taught in culinary schools and deemed foundational, some are used often in home cooking, while others are used more in restaurant cooking or rarely made at all anymore.

While in my first semester of the Culinary Arts program I attended, we made these sauces until we could make them perfectly:

This is roux whisked with milk or other dairy to make a white sauce. Ever made macaroni and cheese or chicken pot pie? The base of both these dishes is béchamel. By itself, béchamel is quite bland, which is why it is usually cooked with other ingredients and not used as a finishing sauce.

A velouté is a light roux whisked with chicken, turkey, fish or any other clear stock. The resulting sauce takes on the flavor of the stock, and the name is derived from the French word for velvet, which aptly describes this smooth but light and delicate sauce. It is usually served over fish or poultry that has been delicately cooked, like by poaching or steaming.

Sauce espagnole is a basic brown sauce. It’s made of brown beef or veal stock, tomato puree, and browned mirepoix, all thickened with a very dark brown roux. This sauce is sometimes used at the foundation for boeuf bourguinon and demi-glace.

This is made by cooking tomatoes down into a thick sauce but used to also be thickened with roux. Unlike more modern-day tomato sauces, the classic French tomato sauce is flavored with pork and aromatic vegetables.

This is the one mother sauce not thickened by a roux. Instead, it’s thickened by an emulsion of egg yolk and melted butter, which means it’s a stable mixture of two things that usually normally can’t blend together. This is a very delicate sauce because the emulsion can easily break, and rich hollandaise is usually used as a dipping sauce for asparagus or a finishing sauce for dishes like eggs Benedict. 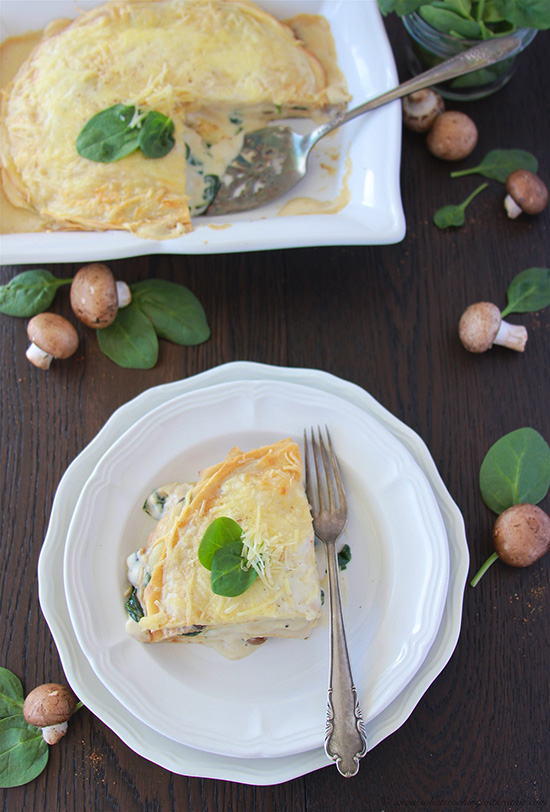 This is only the beginning when it come to sauces because the 5 Mother Sauces are the foundation of all other sauces.  This sauce tree is a visual of the sauces each Mother Sauce can be made into. . . 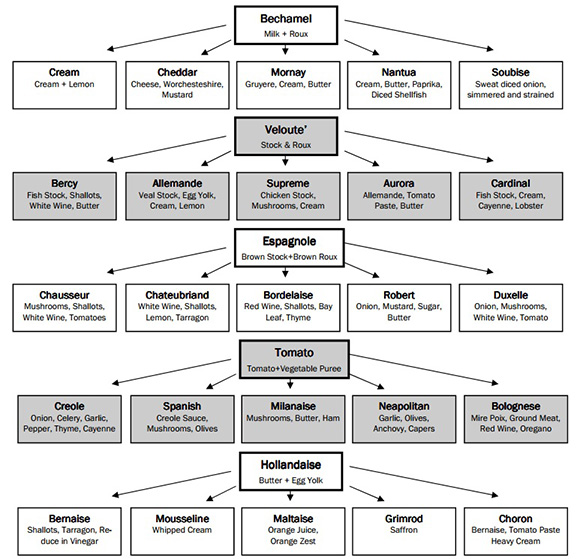 Pretty cool, right!  There are hundreds of spins off these sauces but now you have a little better idea of how it all works. 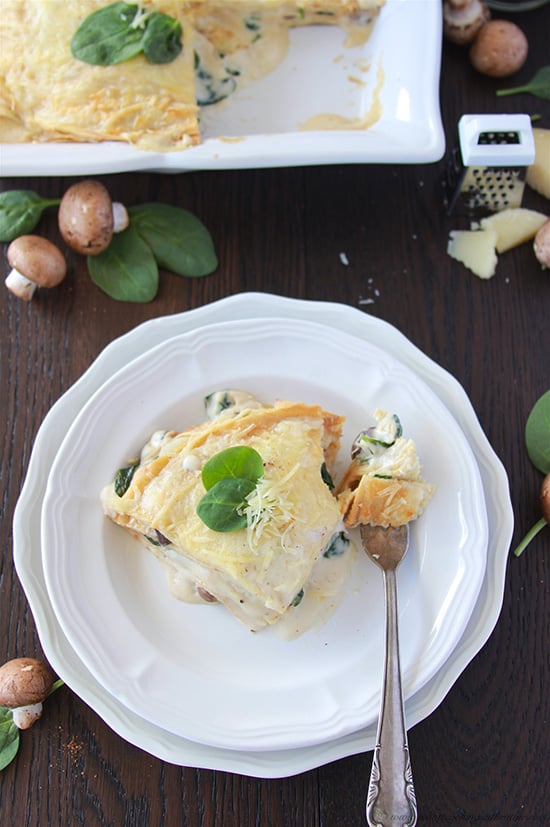 Today, we’re visiting some of the beautiful places in France~ they have approximately 82 million foreign visitors annually.  That’s really quite impressive, don’t you agree?!  Let take a look at some of the most popular places. . . 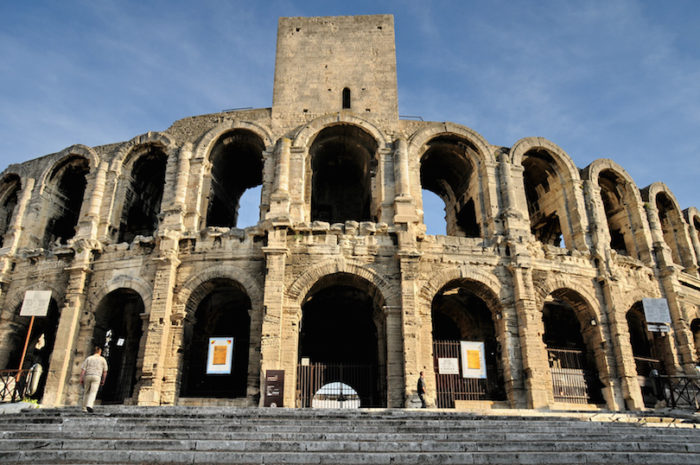 Arles was once the home of master artist, Vincent van Gogh, Arles is a Provencal city of remote tranquility and arresting beauty. One of the city’s biggest attractions is the surviving remnants of Roman architecture, which include the Roman Amphitheater. This large arena serves today as a venue for bullfights, festivals and other special events. 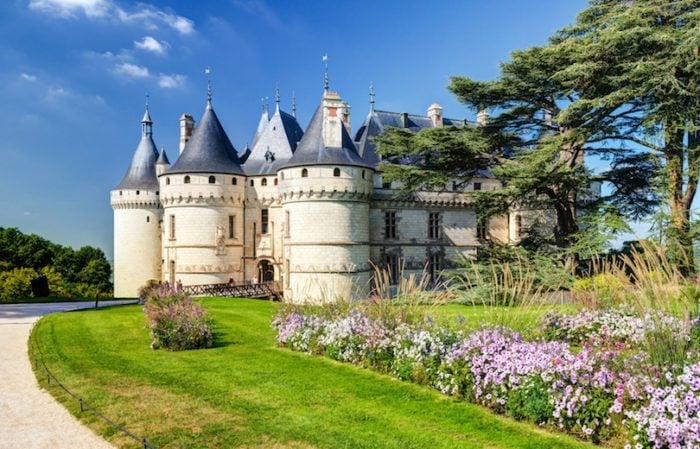 Loire Valley is a popular tourist destination, the Loire Valley is a region in the center of France, regarded for its spectacular scenery, splendid chateaux, picturesque vineyards and historic villages. The Loire Valley stretches 280 km (175 miles) along the Loire River, twisting and turning through some of France’s most beautiful villages and charming chateaux. Some of the most famous chateaux include Chambord, Amboise, Rivau, Chinon and Chenonceau. The valley is home to many wineries that offer tours and wine tastings. 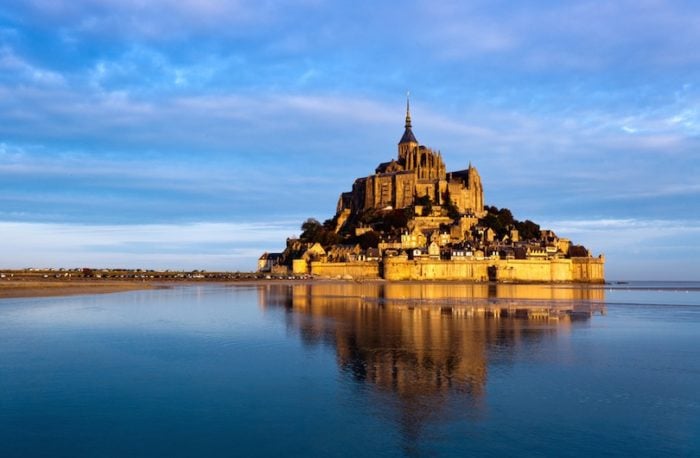 Rising up from the midst of vast mud flats and some of Europe’s most powerful tidal waves is the rocky island of Mont Saint-Michel, located off France’s northwestern coast in Normandy. The tidal island is one of the most popular places to visit in France for its construction of medieval structures built as if stacked upon one another and crowned with the star attraction, the Abbey of Mont Saint-Michel. The awe-inspiring abbey was built by devoted monks in 708 AD after the Bishop of Avranches was allegedly visited by the Archangel Michael. 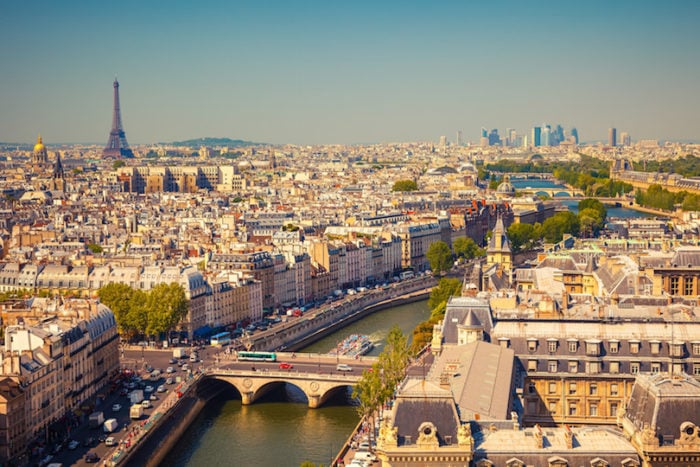 Attracting more than 45 million visitors annually, Paris is the world’s most popular tourist destination. Dubbed various nicknames like the City of Lights, City of Love and Capital of Fashion, Paris is the capital city of France, known for its romantic ambiance and command in industries like business, entertainment, gastronomy, fashion and art and culture. In addition to iconic landmarks like the Eiffel Tower, Arc de Triomphe and Notre Dame Cathedral, Paris is also home to some of the world’s finest museums that include the Louvre Museum and Musee d’Orsay.

I’ve been to southern France but I’m itching to explore so many more places!  But, for now let’s bring some French cooking into our own homes with this decadent French Gâteau de Crêpes à la Florentine. . . 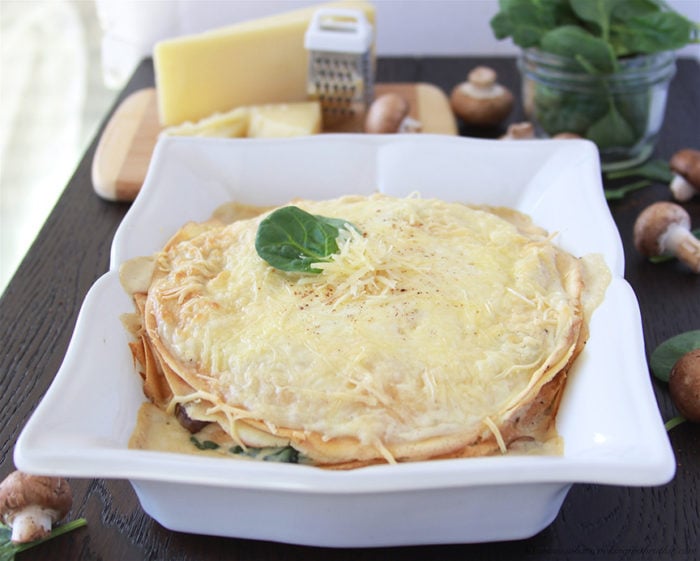 I hope you have a wonderful Wednesday!