I had the best time making Pâte à Crêpes on FOX13 The Place yesterday. . . every segment is filled with lots of fun plus sharing good food always makes for a fabulous time!

Cook up some home-made Valentines Day love with Pâte à Crêpes they’re the perfect way to start off the day!

Pâte à Crêpes or the Basic French Pancakes are thin and light and oh so wonderful!  I think we all quite adore them. If France had a national fast food, it would have to be crêpes.  But, actually lets not think of crêpes as a pancake but rather a round, soft piece of flat bread to be filled with an endless variety of fillings both savory and sweet! 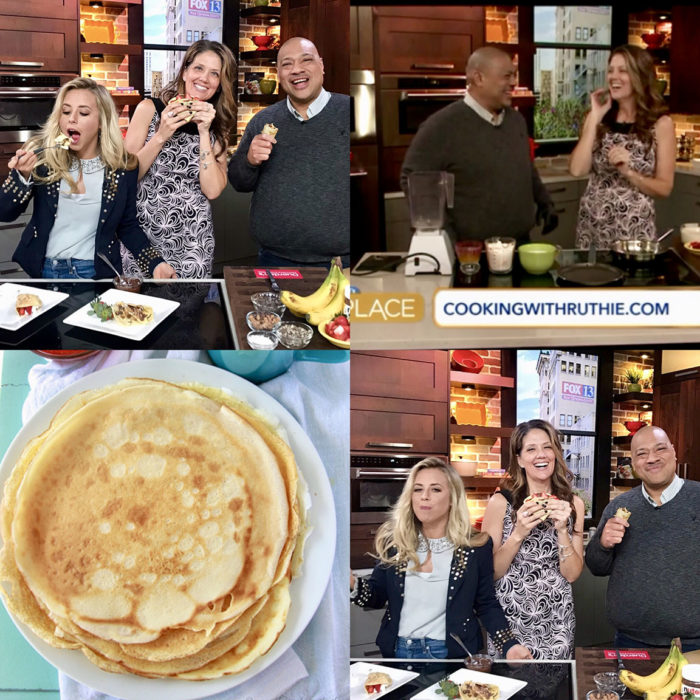 • Prepare the batter and allow it to sit overnight in the fridge.

• The batter must be allowed to rest to produce tender and chewy crêpes, for at least 3 hours but most preferable is overnight.

• The batter will keep perfectly for up to three days in the fridge.

• Another option is to cook them all at once and wrap them in a clean kitchen towel to reheat and enjoy through out the day.

I don’t claim to turn out a perfectly round crêpe or that I am the most proficient at crêpe-making but I sure do have a lot of fun! This simple crêpe pan works just great for me but naturally, having a crêpe maker can produce a thiner, more round crêpe. Whatever you like to use to cook them; the pan must be HOT so the batter sets quickly and cooks evenly when the batter is poured and swirled.  For beautifully thin crêpes, the batter should not be any thicker than heavy cream, if it is thicker then just thin it with a little water first.

The word crêpe is French for pancake and is derived from the Latin crispus meaning “curled”.

Crêpes originated in Brittany (fr. Breton), in the northwest region of France, which lies between the English Channel to the north and the Bay of Biscay to the south.  Crêpes were originally called galettes, meaning flat cakes. The French pronunciation of both words is with a short e, as in bed.

On February 2 crêpes are offered in France on the  holiday known as Fête de la Chandeleur, Fête de la Lumière, or “jour des crêpes”.  Not only do the French eat a lot of crêpes on this day, but they also do a bit of fortune telling while making them.  It is traditional to hold a coin in your writing hand and a crêpe pan in the other, and flip the crêpe into the air.  If you manage to catch the crêpe in the pan, your family will be prosperous for the rest of the year.

Here’s a link to the original our recipe Pâte à Crêpes and if you’d like to watch more of our TV segments they can be found over on our PRESS PAGE!

We hope you’ll cook right along with us as you watch our Pâte à Crêpes on FOX13 The Place!

Ruthie is a professionally trained Chef who specialized in bringing cuisines, cultures, and culinary adventures to your kitchen. Madeliene is the mastermind behind the blog along with being a wife, mother, and full-time masters/doctorate student in psychology. Our mother & daughter team inspires readers to create in the kitchen, explore the world, and find joy in all the many aspects of living!
Power Bio Box by HOI
You are here: Home Video Kitchen Tip Series TV Segments Pâte à Crêpes on FOX13 The Place
Title:
Pâte à Crêpes on FOX13 The Place
Authors:
Categories:
Mentions:
crepes, eggs, fox13, france, Valentine's Day
Keywords:
Pâte à Crêpes
Last Updated:
February 17, 2022