Horiatiki Greek Village Salad & Acropolis of Athens made with fresh from the vine tomatoes, cucumbers, peppers, and red onion. . . served with a thick slice of greek feta cheese, drizzled with greek olive oil, a handful of kalamata olives, and sprinkled with dried oregano. The Greek Village Salad or Horiatiki Salata is served at restaurants as well in homes. Simply delightful! 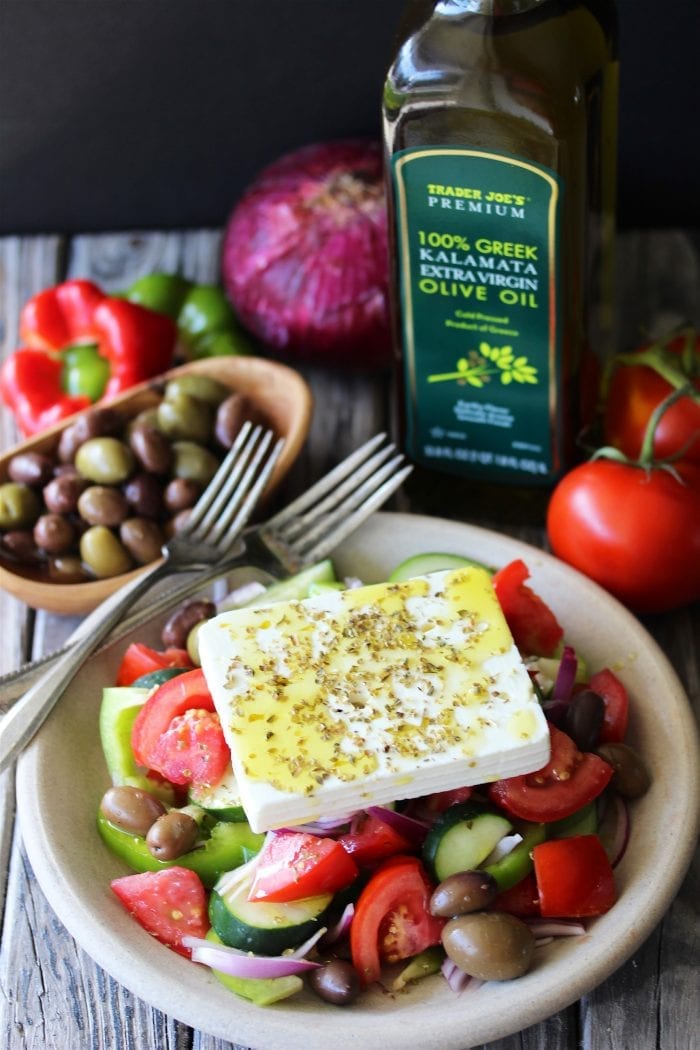 Horiatiki Salata or Greek Village Salad are two of my most favorite things that I loved about my recent travels to Athens, Greece! A simple and beautiful salad served in restaurant’s and enjoyed many times around the tables of my friends home. I loved being in Greece with some of my dearest friends, who I refer to as my Greek family. I’m so happy to have been a part of their kitchen–watching and learning from Vivi and Victoria.

I learned about the Greek way of life. . .  visiting historical sites, restaurants, and the city of Athens with them. It was wonderful. I’m so very grateful to the Karpos family for welcoming me into their home.

Today’s Horiatiki Greek Village Salad & Acropolis of Athens are both traditional must-have experiences! How do I even begin to express the Acropolis of Athens?! It’s completely amazing! I’m grateful I was able to experience this historical wonder just a few of weeks ago on my trip to Greece. The wanderlust in me loves being immersed in cultures, cuisines, and histories of the world. And then sharing them with you is the fun part! 🙂 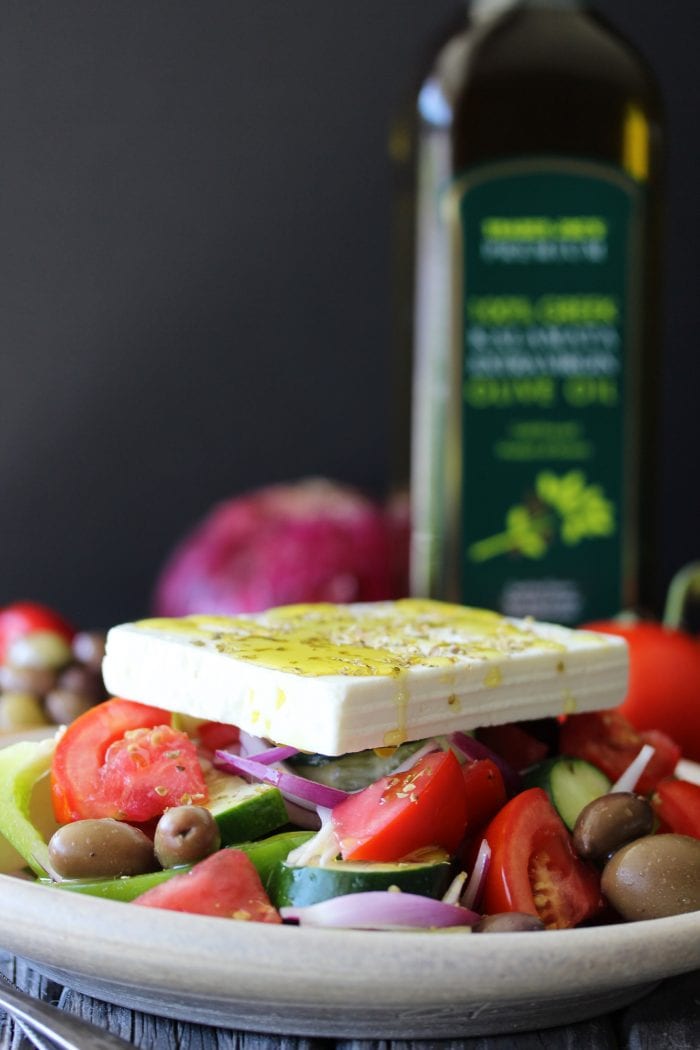 The Parthenon of Athens, Greece

The Parthenon of Athens has a long and complex history. Built nearly 2,500 years ago as a temple dedicated to the Greek goddess Athena, it was for a thousand years the church of the Virgin Mary of the Athenians, then a mosque, and finally an archaeological ruin.

In the 5th century BC, the Athenians, empowered from their victory over the Persians, carried out an ambitious building program under the leadership of the great statesman Perikles, comprising a large number of monuments including the Parthenon, the Erechtheion, the Propylaia and the temple of Athena Nike.

The monuments were developed by an exceptional group of architects (such as Iktinos, Kallikrates, Mnesikles) and sculptors (such as Pheidias, Alkamenes, Agorakritos), who transformed the rocky hill into a unique complex, which heralded the emergence of classical Greek thought and art. On this hill were born Democracy, Philosophy, Theatre, Freedom of Expression and Speech, which provide to this day the intellectual and spiritual foundation for the contemporary world and its values.

The Acropolis’ monuments, having survived for almost twenty-five centuries through wars, explosions, bombardments, fires, earthquakes, sackings, interventions and alterations, have adapted to different uses and the civilizations, myths and religions that flourished in Greece through time. To read more visit UNESCO 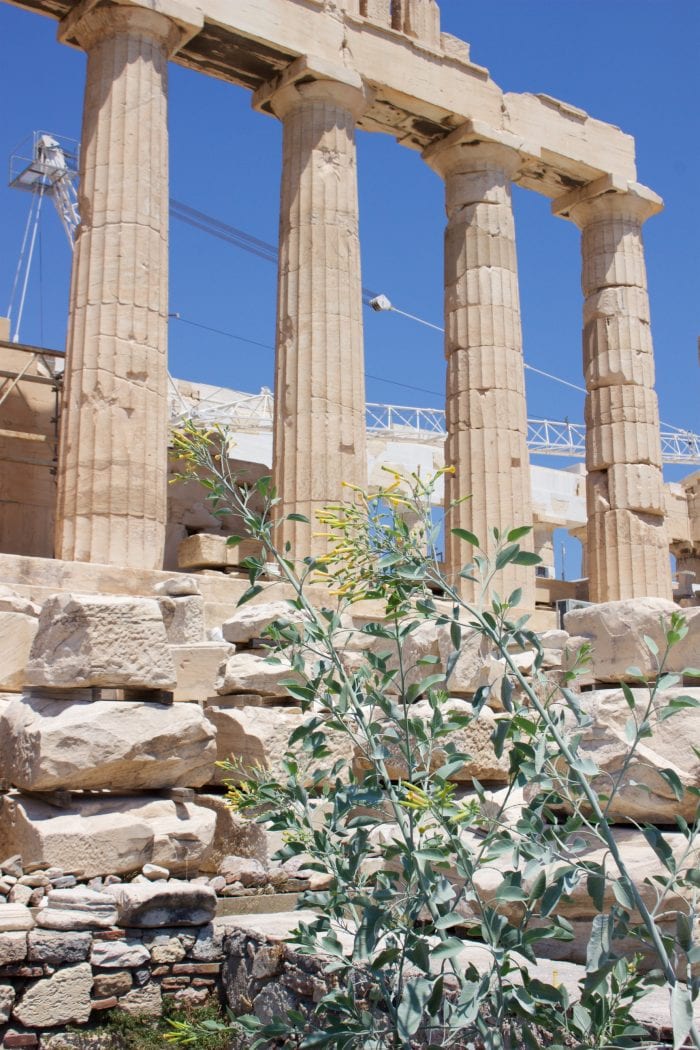 The Parthenon was the center of religious life in the powerful Greek City-State of Athens, the head of the Delian League. Built in the 5 century B.C., it was a symbol of the power, wealth and elevated culture of Athens. It was the largest and most lavish temple the Greek mainland had ever seen.

Today, it is one of the most recognized buildings in the world and an enduring symbol of Ancient Greece.

The building was altered and the sculptures much damaged over the course of the centuries. The first major loss occurred around AD 500 when the Parthenon was converted into a church. When the city was under siege by the Venetians in 1687, the Parthenon itself was used as a gunpowder store.

A huge explosion blew the roof off and destroyed a large portion of the remaining sculptures. The building has been a ruin ever since. 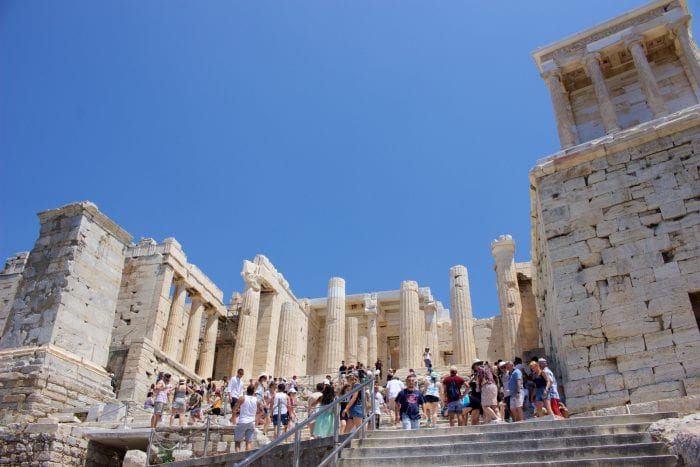 Making your way to the top of the Acropolis is no small endeavor and I was a little surprised to discover that it is somewhat slippery. Be sure to wear shoes that are good for exercise (at least tennis shoes) and have good traction, because the natural dust of the Acropolis gets quite slick. 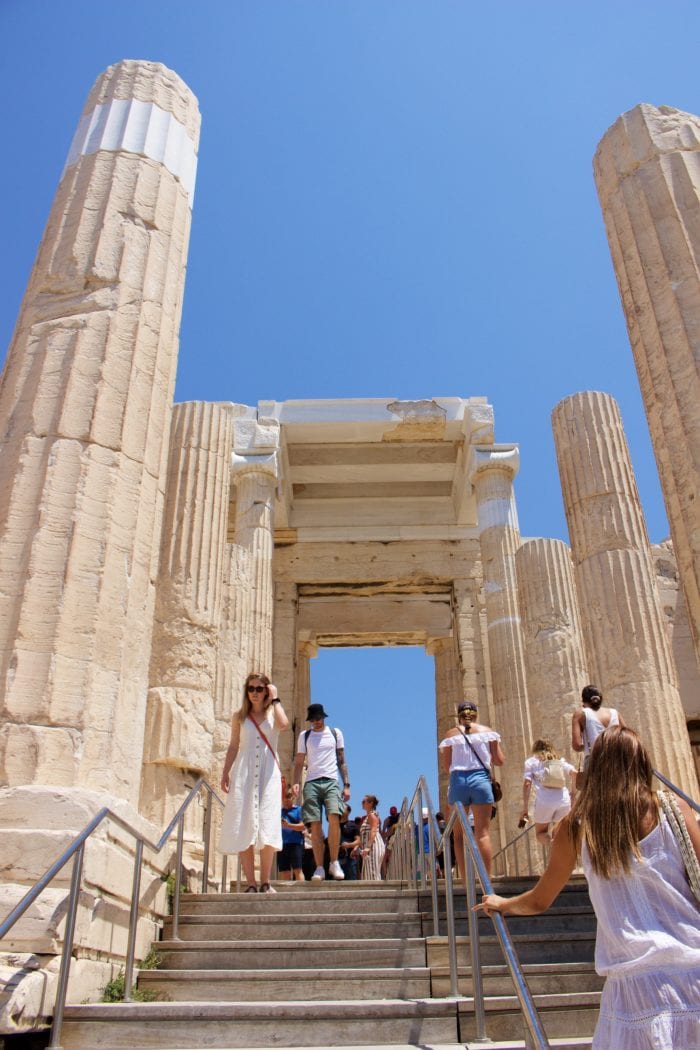 Even with my hiking Chaco sandals, I had to be careful and I even had to catch myself from slipping on the paths or steps at least a couple of times! Be prepared to climb many stairs (I’ve read there are 150 stairs) and walk carefully for about an hour. 🙂

Video of the Acropolis Museum in Athens, Greece

Healing of the Parthenon

Architects, archaeologists, engineers, conservators, draughtsmen, marble masons and workers – the staff of the Acropolis Restoration Service (YSMA) – are the people we may see around us on every visit to the Acropolis, on scaffolding, on cranes, running the organized work areas.

On a daily basis, they deal with the structural problems of these ancient monuments, dismantling ailing parts that need “healing,” conserving architectural members, completing them where necessary with new Pentelic marble, and repositioning them. 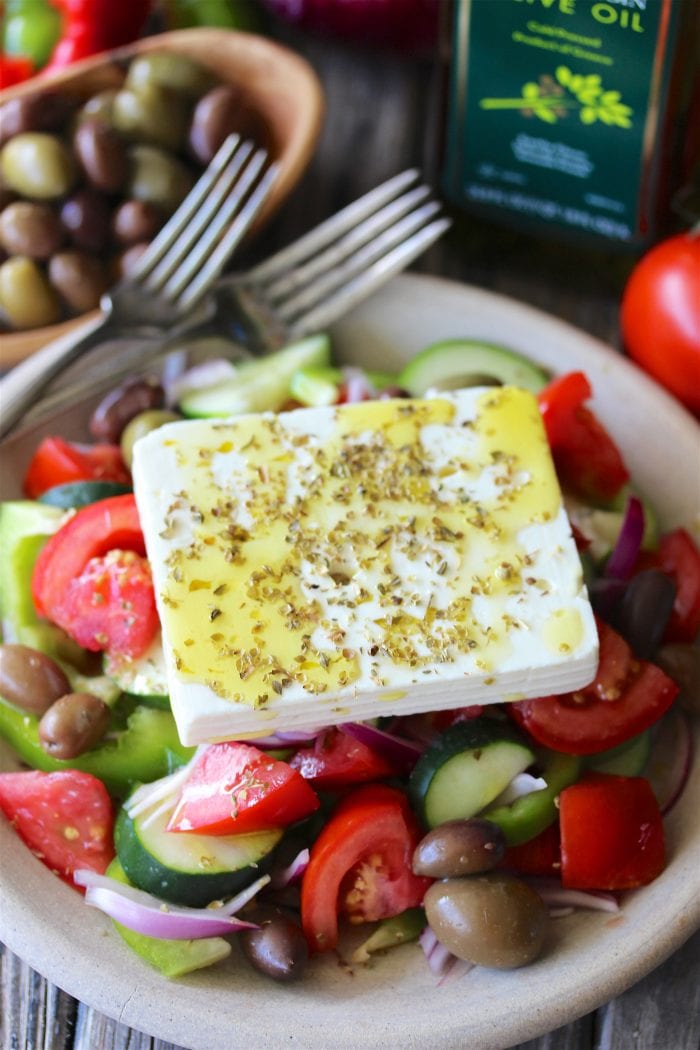 This temple, with its dramatic pillars, was built atop a sacred rock on a bastion around 420 BC and is considered the earliest fully Ionic temple on the Acropolis. It was designed by architect Kallikrates, built in honor of Athena. Even today, it’s surprisingly well preserved, albeit delicate and ancient. It was rebuilt multiple times over the years, most recently from 1936 to 1940. 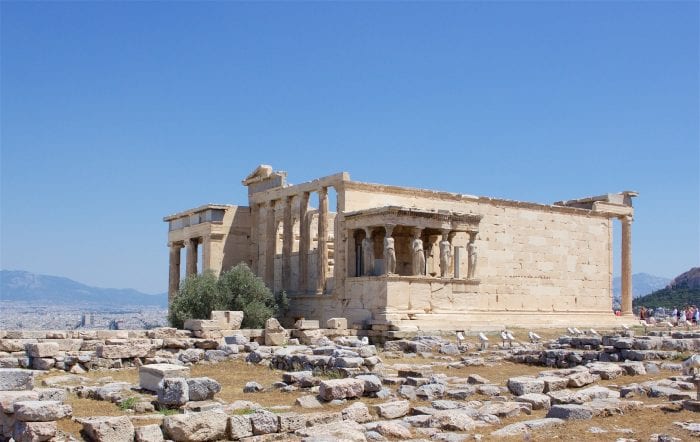 The Temple of Athena Nike is the smallest structure on the Athenian Acropolis, but holds no less importance than its neighboring shrines. Built to honor Athena Nike, the goddess of victory, the site upon which the temple was constructed has ceremonial roots that date back to the Bronze Age. 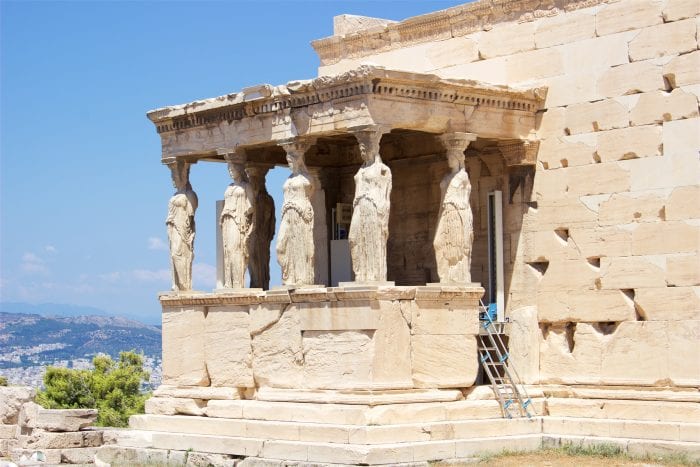 When the newer, Classical temple was built in the fifth century B.C., it no doubt did double duty: it stood as a shrine to Athens’ patron goddess, and also acted as a symbol of Athens’ military and political strength. 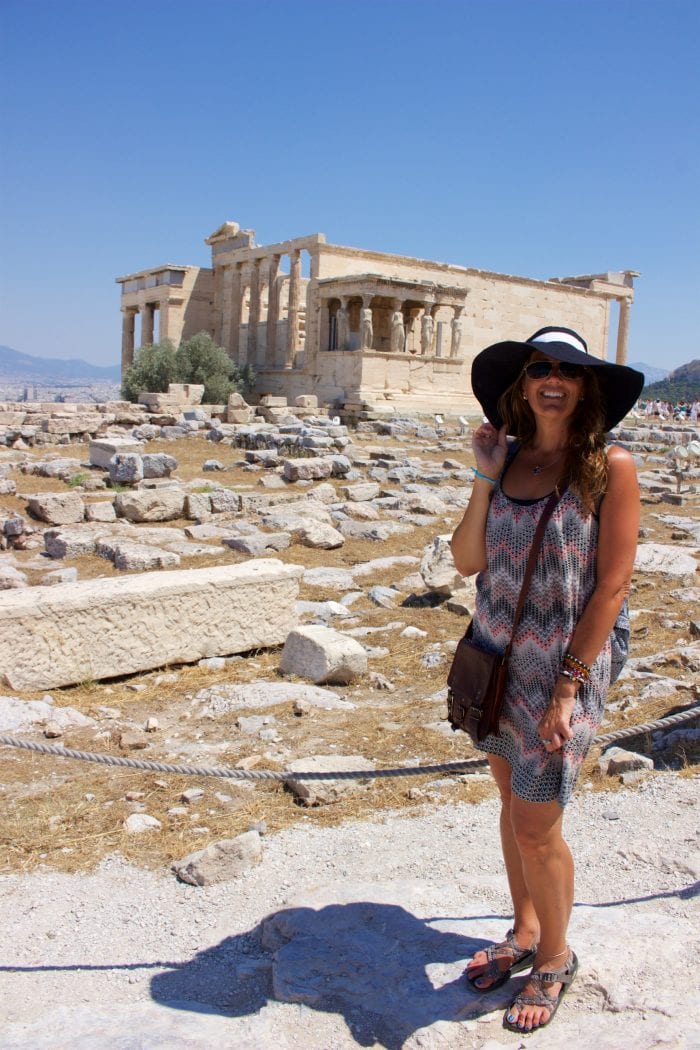 The new Acropolis Museum was completed in 2007 and offers all the amenities expected in an international museum of the 21st century. Where are the surviving sculptures of the Parthenon? The majority of the sculptures are roughly equally divided between Athens and London.

Important pieces are also held by other major European museums, including the Musée du Louvre in Paris, Vatican Museums, the National Museum in Copenhagen, the Kunsthistorisches Museum in Vienna, the University Museum in Würzburg, and the Glyptothek in Munich.

While there is are on-going effort to bring back the statues from the Parthenon to the museum in Athens. . . many of them still remain in other countries. In the case of the missing woman from the Temple of Athena Nike, you can see in the photo’s below that one of the women statutes is missing and has yet to be returned from England.

Actually, the room with these statues is the only place where photo’s are allowed in the whole museum!

Check out some of our other Greek recipes and delight in the beauty of Greece in our Culinary Journey Around the World  posts.

Views from the top of the Acropolis of Athens, Greece! 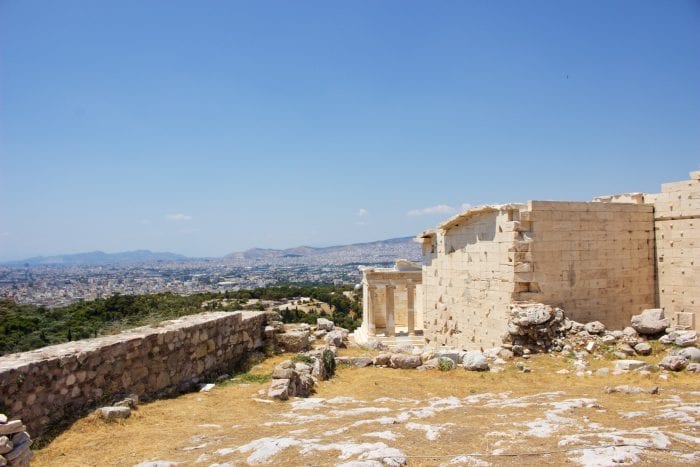 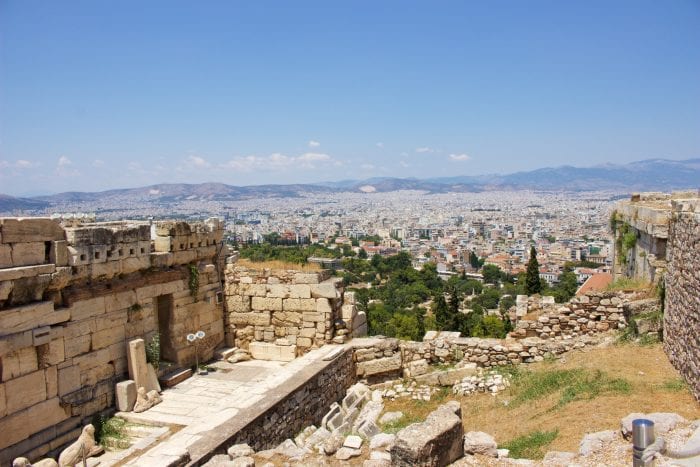 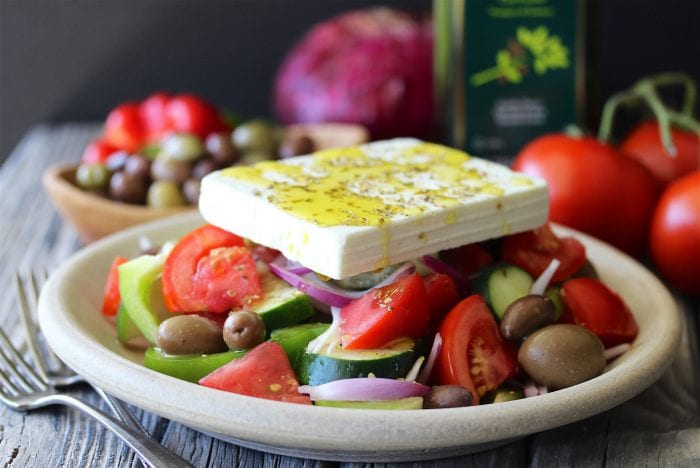 Horiatiki Greek Village Salad & Acropolis of Athens is giving you a dose of some amazing Greek food and culture!

Ruthie is a professionally trained Chef who specialized in bringing cuisines, cultures, and culinary adventures to your kitchen. Madeliene is the mastermind behind the blog along with being a wife, mother, and full-time masters/doctorate student in psychology. Our mother & daughter team inspires readers to create in the kitchen, explore the world, and find joy in all the many aspects of living!
Author Bio Box by HOI
Author:
Ruthie & Madeliene
Categories:
Mentions:
Acropolis, Athens, cucumbers, greece, Greek Feta Cheese, Tomatoes
Keywords:
Horiatiki Greek Village Salad & Acropolis of Athens
Last Updated:
July 22, 2021