Ropa Vieja is a traditional Spanish recipe plus highlights from a recent trip to Spain!

Our Culinary Journey Around the World is heading to Spain for the next several Wednesday’s to enjoy some recetas deliciosas (delicious recipes) plus highlights from my daughter, Madi’s, recent trip to Spain!  I’m so thrilled to have her with us to share some of the beautiful sights and places she experienced! 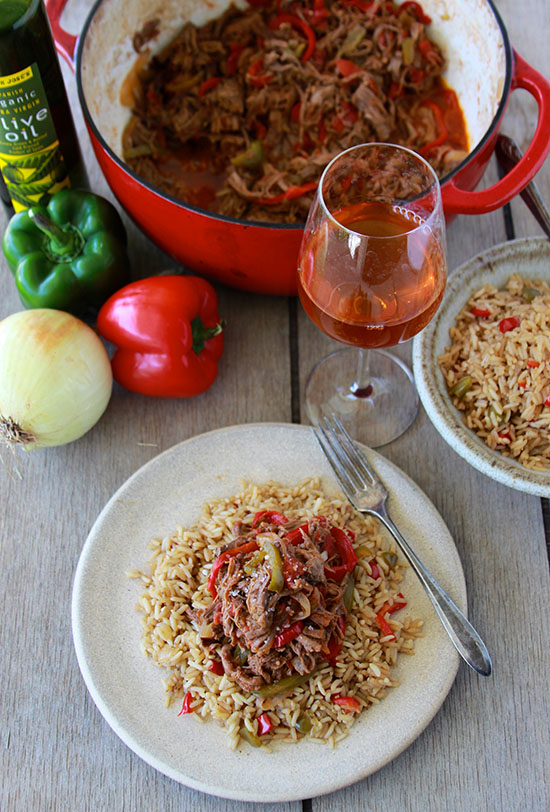 Like many great parts of Cuban culture, Ropa Vieja started life in Spain. Its name translates to ‘old clothes’ and the story goes that a penniless old man once shredded and cooked his own clothes because he could not afford food for his family. He prayed over the bubbling concoction and a miracle occurred, turning the mixture into a tasty meat stew. 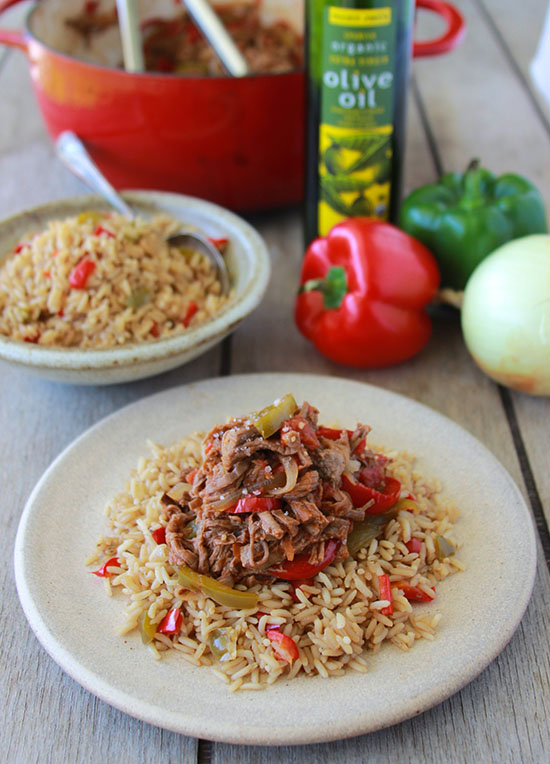 Now, we’re not totally sure that this story is factual but it’s wonderful nonetheless. What we do know is that the recipe for Ropa Vieja is over 500 years old and originated with the Sephardic Jews in the Iberian peninsula of Spain. Because cooking was not allowed on the Sabbath, the Sephardi would slow cook a hearty stew the night before. 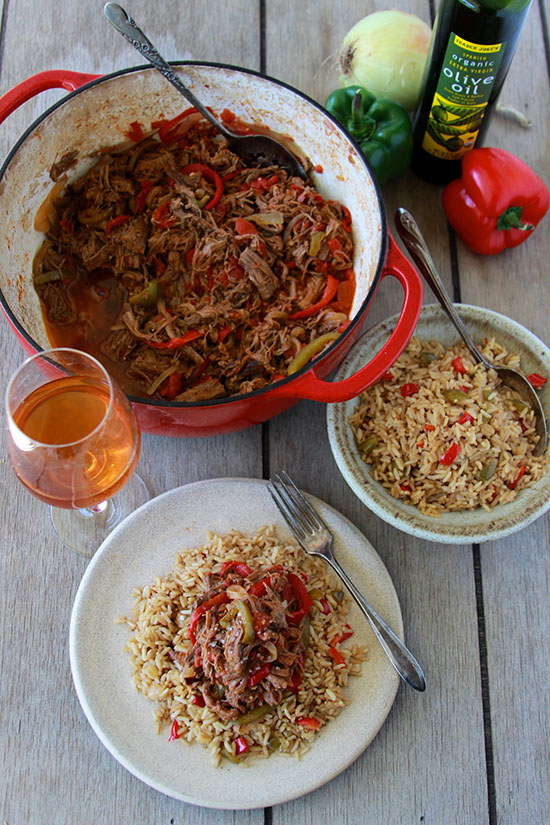 Hi! I’m Madi and I’m thrilled to share my Spain experience with all of you! It was a wonderful trip that I was lucky to be apart of. Before we begin, let me explain why… I went on a 2 week study abroad to Spain with my psychology department. We had 25 students and 5 professors total so we were quite a big group! I was blessed to be able to learn from my professors and classmates along the way. We went to 9 different cities while we were there. For the next month or so, I’ll be sharing about the cities that we visited and of course, the AMAZING food. Today, let’s start with Barcelona!! 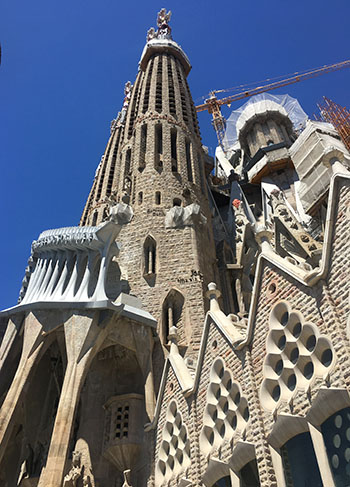 The pictures above are all of La Sagrada Familia (The Sacred Family) Cathedral. It is huge, stunning, and breathtaking. This Cathedral was started by Antoni Gaudi in 1882 and is still not finished! Gaudi was an amazing architect, way ahead of his time, and so very creative. Gaudi passed away in 1926. La Sagrada Familia was his last piece of work and he put his whole heart and soul into it until he passed away. From there, it got taken over by other architects and has continued to be built as funds permit. There is some controversy in Barcelona over how the new architects are building La Sagrada Familia. Some people believe that Gaudi wouldn’t of finished it like they are now. Regardless, it continues to be a one of a kind building that attracts visitors from all over the world. Their goal is to finish it by 2026 for Gaudi’s 100th death anniversary! 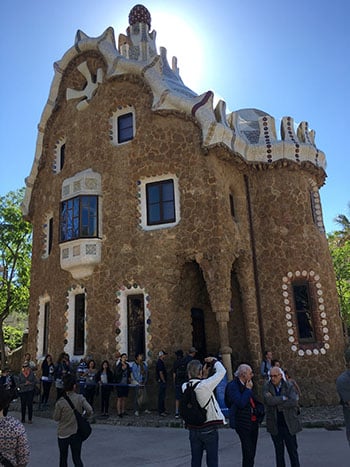 Barcelona for us, was all about Gaudi! I am a now a definite Gaudi fan after seeing and learning about all that he did. Everything was breathtaking and I was so in awe of how gifted he was! Above you’ll see pictures from Park Guell by Antoni Gaudi. Park Guell is a park composed of gardens and wonderful architecture. Gaudi loved mosaics, as you can tell, and used scrap ceramic pieces to create them. All of his buildings had this in common! 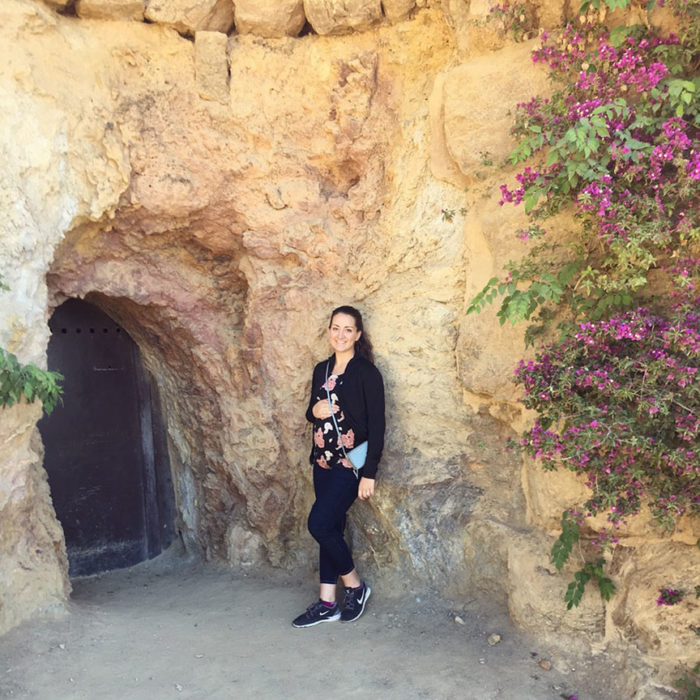 Fun fact: I was 26 weeks pregnant on this trip and now I am 29! I’m expecting a boy and I’ll forever tell him that he’s already been to Spain, so no need to go again. 😉 My husband, family, and I are all very excited to welcome this little one into the world in August. My mom, Ruthie, seems to still be in shock that she’s going to be a grandma. She has requested that she be called “Gigi”. She’ll be the best Gigi ever. 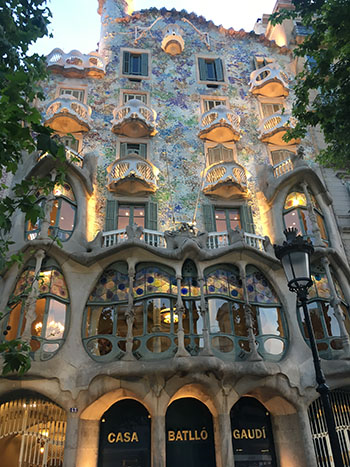 Casa Batillo (pictured above) and Casa Mila were two other buildings of Gaudi’s that we saw. Both of these houses point toward La Sagrada Familia, to show the sacredness of his work and what that Cathedral meant to him. 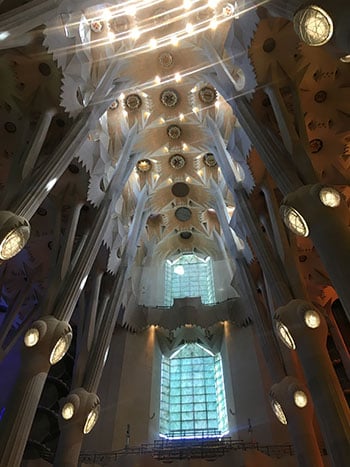 Just look at that stained glass! This is inside La Sagrada Familia. I tried my best to get some decent pictures on my iPhone, but honestly, pictures don’t even do it justice. If you ever visit Barcelona, Spain, I’d say you need to put La Sagrada Familia, or anything by Gaudi really, on your must see list! You will not regret it. Gaudi’s work was influenced by his passions in life: architecture, nature, and religion. He was and still is an inspiration to many! I love stained glass and mosaics so how couldn’t I fall in love?! 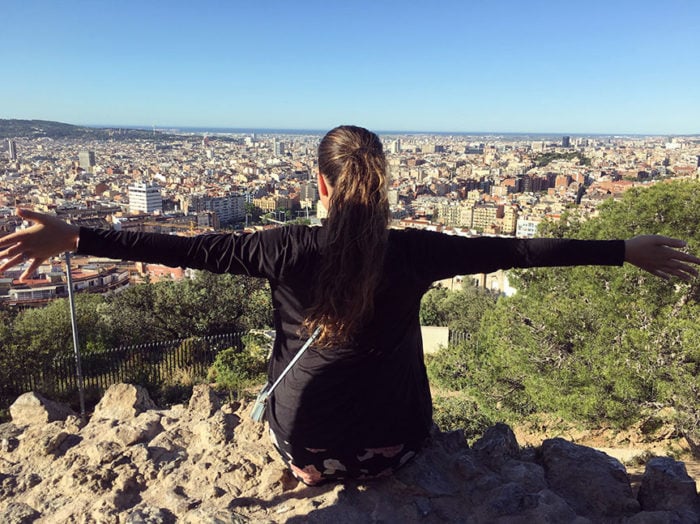 We climbed up to the top of Park Guell to get an overview of Barcelona. This city was magical, with it’s beautiful buildings on every street and great cafes at every corner. I love the Spanish culture! I dream of living in Spain for at least a year. My husband and I are looking into an internship or possibly graduate school there. And of course, we will be bringing baby as well. 🙂 I hope you have enjoyed learning a little bit about Barcelona today! Thanks for following my journey. See you next week! 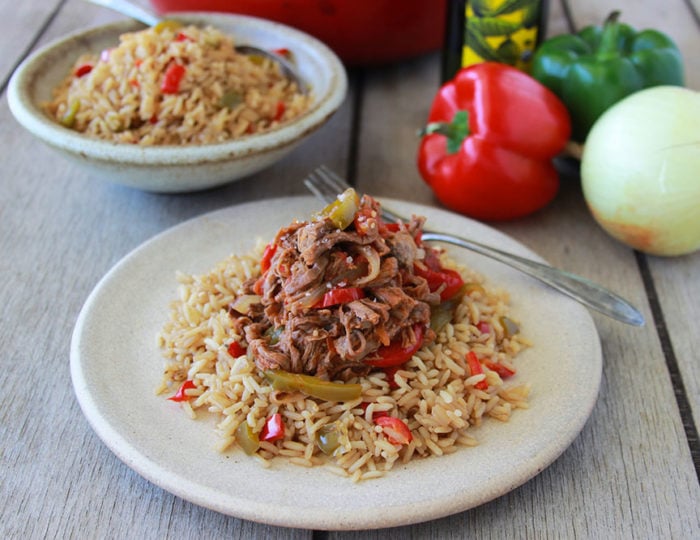 Ropa Vieja is a savory dinner that’ll leave you dreaming of Spain!

Hope your Wednesday is lovely!! 🙂

Ruthie is a professionally trained Chef who specialized in bringing cuisines, cultures, and culinary adventures to your kitchen. Madeliene is the mastermind behind the blog along with being a wife, mother, and full-time masters/doctorate student in psychology. Our mother & daughter team inspires readers to create in the kitchen, explore the world, and find joy in all the many aspects of living!
Power Bio Box by HOI
You are here: Home Travel Ropa Vieja
Title:
Ropa Vieja
Authors:
Categories:
Mentions:
flank steak, green pepper, onion, red pepper, sherry wine
Keywords:
Ropa Vieja
Last Updated:
July 12, 2019